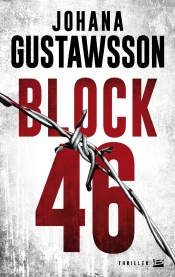 London. A renowned profiler, the taciturn Emily Roy investigates a series of murders of children whose savagely mutilated bodies present the same wounds as the Swedish victim: the throat torn out, the eyes removed, and a mysterious Y carved on one arm.

A strange thing for a serial killer, to change both the type of prey and the hunting grounds... or is it in fact a pair of psychopaths at work?

The numerous questions raised by the two cases send Emily Roy to Sweden, where she meets an old acquaintance, the tenacious Alexis Castells, a French writer who specialises in serial killers.

These two women with opposite personalities will have to chase killers as elusive as they are perverse. A pursuit that will lead them to the atrocities that took place in Buchenwald in 1944.

'Emily Roy and Alexis Castells make a terrific, original duo. They have a future.' THE TIMES

'A bold and intelligent read.' THE GUARDIAN

‘A powerful movie-like thriller with amazing characters. You won’t be able to put it down.' TELE POCHE