A city rife with conspiracies and uprising. Yet the greatest threat will come from the outside 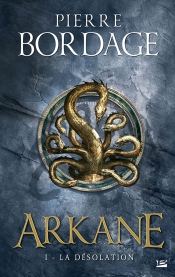 Arkane is a labyrinth city governed by seven founding houses with corrupt power concentrated in the Heights, the luxurious upper levels. Court intrigues, poisonings, murders and black magic all take place there. Meanwhile the condemned and outcast are in the Dumps neighborhood.
When some of the houses form an alliance to eliminate the Drac house, this upsets the balance in Arkane, and Oziel, the last representative of its clan, flees the city’s Heights. She tries to reach the Dumps to join her brother and raise an army among the prisoners in the terrible penal colony in the depths of the city.
Along the way she will meet Renn, an apprentice rock wizard, and Orik, a warrior from a faraway land, who have come to Arkane to warn the city leaders of an invasion by a horde of frightening creatures from the north...
Book 1 The Desolation
Book 2 The Resurrection

• A formative journey with engaging, sophisticated characters that evolve in a world riddled with danger
• The return of a master storyteller whose fertile imagination is prized by a large readership
160 000 words